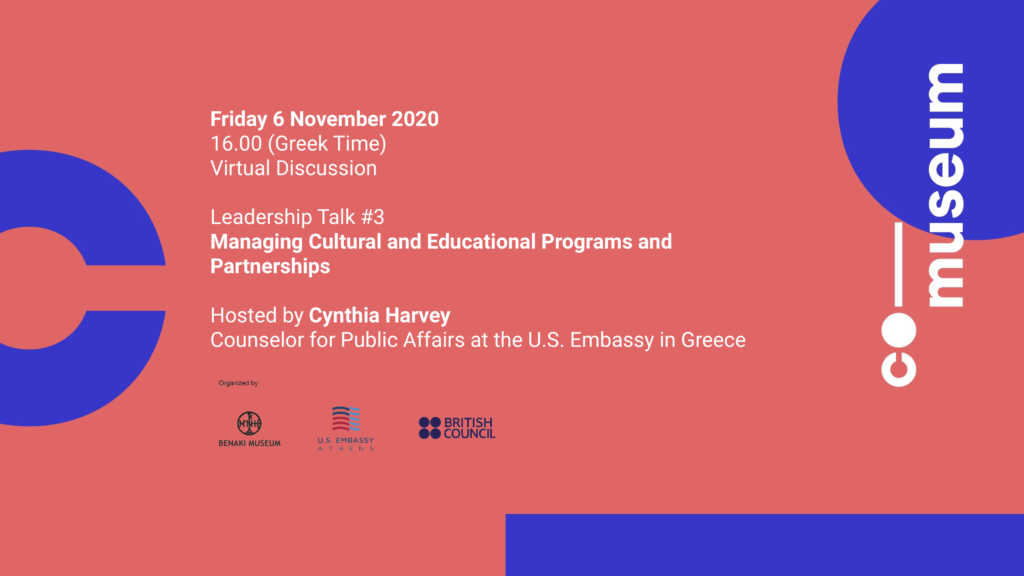 The CoMuseum International Conference is hosting a series of digital conversations on “Leadership in Challenging Times” featuring local and international experts from museums, as well as educational and cultural organizations. This series of discussions reflects on: how the fields of art, culture, and education have been affected by the COVID-19 pandemic; how these sectors and their audiences are remaining healthy and strong during this period of unprecedented challenges; and how we can rethink cultural leadership and reimagine the role and future of cultural organizations.

“Managing Cultural and Educational Programs and Partnerships” is the third conversation in the series and will be hosted by Cynthia Harvey, Counselor for Public Affairs at the U.S. Embassy in Greece. This discussion will focus on how cultural and educational institutions have managed the COVID-19 pandemic and its impact on their programming, including international exchanges and cooperation. The virtual discussion takes place on 6 November 2020, at 16.00 – 17.00 (Greek Time).

The panel discussion will feature:

Jenifer Neils (A.B. Bryn Mawr College, Ph.D. Princeton University) is the Director of the American School of Classical Studies at Athens, the first woman to hold that position in the School’s 136-year history. Formerly the Elsie B. Smith Professor in the Liberal Arts and the Ruth Coulter Heede Professor of Art History at Case Western Reserve University, she served as Chair of the American School’s Managing Committee from 2012 to 2017. As a field archaeologist, she has excavated in northern Greece (Torone), Tuscany (Poggio Civitate), and Sicily (Morgantina), and she has published material from all of these sites. A former curator of ancient art at the Cleveland Museum of Art (1980–1986), she has organized two major exhibitions on the ancient world: Goddess and Polis: The Panathenaic Festival in Ancient Athens (1992) and Coming of Age in Ancient Greece: Images of Childhood from the Classical Past (2003). As an art historian, she has written extensively on the Parthenon sculptures, Athenian vase painting, and iconography. She has written and edited over a dozen books of which the most recent are Women in the Ancient World (2011) and the Cambridge Companion to Classical Athens (2021). Prof. Neils has held a number of distinguished fellowships, including at the American School of Classical Studies at Athens, the American Academy in Rome, the Getty Research Center, and the Center for British Art at Yale University. She has been visiting professor at the University of California at Berkeley and Johns Hopkins University, and she was the Martha Sharp Joukowsky Lecturer of the Archaeological Institute of America, an institution for which she also served for four years as Vice President for Publications.

Gabriella Triantafyllis is the Director of Programming and Production at the Stavros Niarchos Foundation Cultural Center (SNFCC) since its opening in 2016. Gabriella holds a B.A. Hons in Theater Studies (DUX) from the University of Athens and an M.A. Distinction in Film and TV Production from the University of Bristol, UK. She is also trained in acting at the Contemporary Theatre of Athens and in black and white photography with Plato Rivellis. From 2008 to 2016 she was the General Manager and Performance Programmer at BIOS, Athens’ centre for today’s arts and cross media, and has also been managing Romantso, the first Greek creative industries incubator. She has worked extensively in the theater, in short films and in TV distribution and is one of the founding members of the music theater company The Beggars’ Operas.

Liz Tunick Cedar is the Manager of Global Cultural Sustainability Programs in the Office of International Relations at the Smithsonian Institution, where she is responsible for leading new partnership development and overseeing the strategic planning and execution of global projects in art and culture. She works with national governments and foreign museums on preserving, developing, and designing cultural institutions, training museum professionals, and enhancing public engagement. She also contributes to the Institution’s efforts to preserve and protect cultural assets in crisis. She has worked previously at several major U.S. museums, including the Art Institute of Chicago, the Clark Art Institute, and the National Gallery of Art, where she was also a Kress Fellow. Ms. Tunick received her B.A. from Dartmouth College and her M.A. in Art History from Williams College. She enjoys practicing her French any chance she gets.

Hosted and curated by Cynthia Harvey | Counselor for Public Affairs at the U.S. Embassy in Athens

Cynthia (Cindy) Harvey is the Counselor for Public Affairs at the U.S. Embassy in Athens, where she oversees cultural and educational programming and media engagement.  She previously served as the Press Officer at the U.S. Embassies in Pretoria, South Africa and Islamabad, Pakistan.   While posted to Washington, she served as a Senior Watch Officer in the Department of State Operations Center and as a Special Assistant to the Under Secretary for Public Diplomacy and Public Affairs.  She joined the Foreign Service in 2003 and has also served in posts in Jerusalem, Amman, and London.  Cynthia earned her Master of Arts in Law and Diplomacy from the Fletcher School of Law and Diplomacy at Tufts University and Bachelors degree in International Relations from the University of Pennsylvania.  She is originally from Longmont, Colorado.

The COVID-19 pandemic has dramatically transformed our lives and our societies, and cultural and educational organizations have gone through their own transformations, from complete shutdowns to limited re-openings. This discussion will be an opportunity to hear from leaders in the field about how their institutions are managing today’s challenges, as well as their visions for the future.